One of the many amazing things about the Beat generation is just how photogenic its protagonists were. They liked taking pictures of themselves, and celebrated photographers of their age, such as Robert Frank, did too. Magnum photographer Burt Glinn also had eyes for the Beats. A sumptuous new collection of previously unseen Glinn images, called The Beat Scene (Reel Art Press), tops anything ever before glimpsed. Part of the novelty of these images isn’t so much that they again capture the thrill of the Beat movement (and moment)—the cheap diners of Times Square and East Village, the basement and second-floor bars, the grungy apartments and jazz jams and poetry readings of Greenwich Village and North Beach—but that they capture this one-take spontaneity in glowing and hitherto unseen colour. 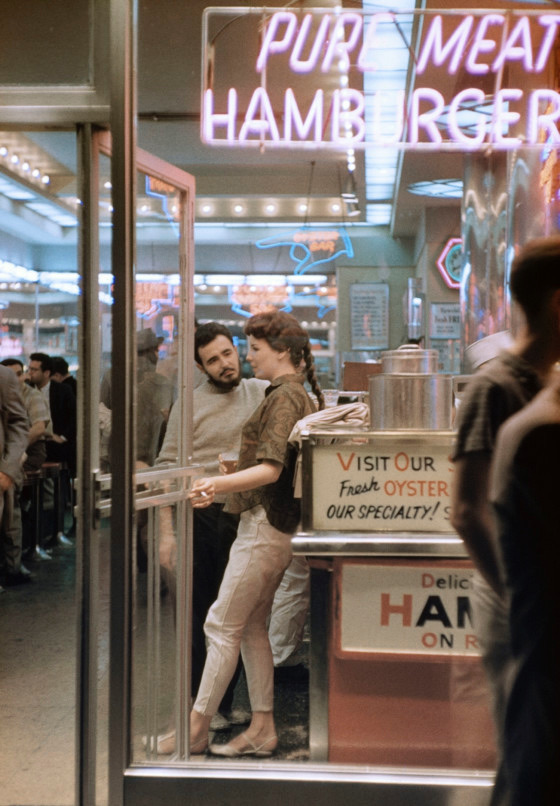 Glinn died in 2008, aged 82, leaving a vast and disorderly archive at his East Hampton home. He spent a good deal of his own career on the road. But rather than bum rides, Life magazine and Magnum Photos paid him handsomely for his globe- trotting assignments. He’d seen much, through his camera lens, arriving in Havana the same year he’d photograph the Beats (1959), only to discover that Cuba was revolting; for ten days Glinn documented the mayhem and the majesty of Fidel Castro, risking life and limb amid the fireworks and gun blasts.

He also photoed English royalty, the St.Moritz jet set, shot rich and famous movie stars and politicians, the landscapes of the South Seas and Japan, of Russia and Mexico, documented wars and invasions—even captured the back of Nikita Khrushchev’s bald head, backdropped against Washington’s Lincoln Memorial. (Glinn said he’d arrived late for the event and could only hastily get a rear shot; but it would become more famous than any full frontal of the Soviet leader.)

And yet, maybe above everything else, Glinn had a unique feel for the Beats, an odd-ball affinity for “the mad ones,” as Jack Kerouac wrote in On the Road, “the ones who are mad to live, mad to talk, desirous of everything at the same time, the ones that never yawn or say a commonplace thing, but burn, burn, burn like roman candles across the night.” Now, we can glimpse those roman candles burning for ourselves, in glorious colours.

The story goes that when Michael Shulman and Tony Nourmand at Reel Art Press planned a Burt Glinn retrospective, they were rummaging through his Long Island studio with widow Elena, delving into an old colour archive. They innocently asked Elena “What else do you have of the Beats that we haven’t seen before?” She pulled out boxes full of colour slides, material that hadn’t been opened for years, perhaps not ever. Holding a few up to the light, Shulman and Nourmand shrieked with excitement, “seeing amazing photos from long ago in a contemporary light.” “The vivid colours,” they recognised, “seen through Burt’s painterly eye, give us a new insight on the reality of the Beat daily life.”

IT WAS BACK IN 1948 when Kerouac, sitting around with John Clellon Holmes (author of Go and The Horn), tried to think up the meaning of the Lost Generation and its “subsequent Existentialism.” After awhile, Jack reflected, “You know, this is really a beat generation.” Suddenly, Kerouac recalls, “Holmes leapt up and said ‘That’s it, that’s right!’” The label stuck. So here we had it, Beat, “a swinging group of Americans intent on joy…a generation of crazy illuminated hipsters,” Kerouac said, “rising and roaming America, serious, curious, bumming and hitchhiking everywhere, ragged, beautification, beautiful in an ugly graceful new way—a vision gleaned from the way we had heard the word beat spoken on street corners on Times Square and in the Village, in other cities in the downtown-city-night of postwar America—beat, meaning down and out but full of intense conviction.” That was Beat. “Live your lives out? Naw, love your lives out.”

We can see a lot of that love in Glinn’s photos, the ragged beautification that Kerouac talks about. In fact, a Kerouac essay, “And this is the Beat Nightlife in New York,” introduces Glinn’s images and its message flows through the entirety of The Beat Scene. Kerouac reminds latter-day viewers that this nightlife has nothing to do with nightclubs, nor with spending money; “it’s a complete nightlife in the truest sense,” he says, well off the radar of commercial night-spots, where you need “mucho money.” In this twilight realm we find the broken ghosts from the penniless wilds, defunct nocturnal treasures like the Half Note Club and Five Spot Café, Gaslight Café and Seven Arts Coffee Gallery, and Grant’s and Bickford’s cafeterias.

One popular all-night joint was Hell’s Kitchen’s Seven Arts Coffee Gallery, at 9th avenue and 43rd street. A grungy set of stairs, with tatty walls adorned with scotch-taped notices, led revellers up to a second-floor sanctum, to an art gallery-cum-bar-cum-coffee shop-cum-poetry stage. A sign overhead says “POETS READ EVERY FRIDAY NIGHT AT 2 A.M.” Once inside, there’s Kerouac himself, shot in black and white, standing amongst crowds of people in a cramped room, all snuggled around little tables. Kerouac sports a raincoat and beret, grips a scrap of paper. What’s he reading out aloud? We’ve no idea. A Haiku? A poem from his Book of Blues? 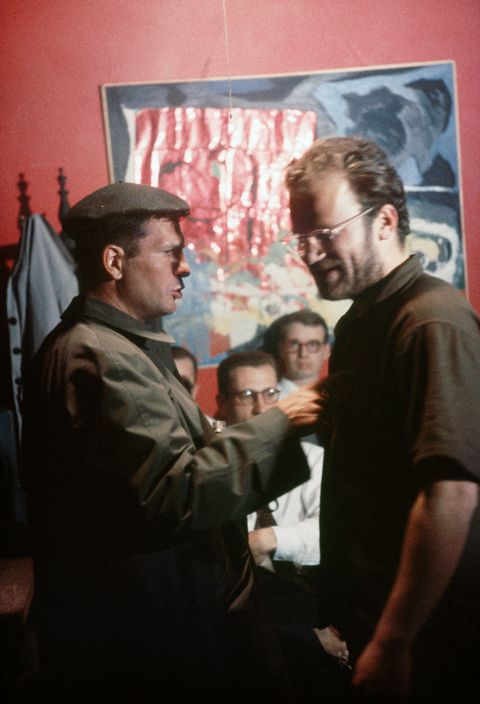 As we leaf through The Beat Scene, Kerouac suddenly appears in full colour, talking with John Rapinic, Seven Arts’ owner. That raincoat and beret, we discover, are matching greyish-green; the colour seems to matter, alters the look and feel. The Seven Arts’ walls come alive, too, in moody red, bearing vibrant abstract expressionist canvases. With colour, the scene leaps out before us; or else maybe permits us to leap into it.

Glinn’s pictures freeze-frame the kinetic humanity of that era, the jazz improvs and poetry readings, the art openings, the dancing and prancing, the couples frolicking in cold-water lofts, the drinking and smooching, the celebrations to life and liberty—they’re there on the page, in rich and evocative technicolour. More than sixty years have passed, yet we’re blessed being able to inhabit this history vicariously.

Sometimes it doesn’t even look like history. Everything looks weirdly contemporary, right down to the haircuts, to the beat- up tennis shoes, to the chinos and white T-shirts. It could almost be a fashion shoot for The Gap. I stress “almost” because there’s a crucial difference, a refreshing contrast to our day: an utter absence of anything commercial, of any branding or labels, of any product placement or scam to fleece us of money.

Equally noteworthy is how immediate and connected everybody is, sitting on one another’s lap, whispering in each other’s ear, engaged in intimate and intensive conversation, making eye contact, focussing on one another, face to face, nose to nose. And all because there weren’t any cellphones or screens around. Nobody cut themselves off with headphones, fiddled with gadgets or got distracted by electronic gismos— just an honest sociability, the nemesis of our alienated Information Age. People created their own entertainment, made their own music and art, their own sounds and rhythms, their own home-baked spontaneity. At these venues, participants themselves were the venue, the entertainment. It was purely inter- subjective; a lifetime burning in every moment. 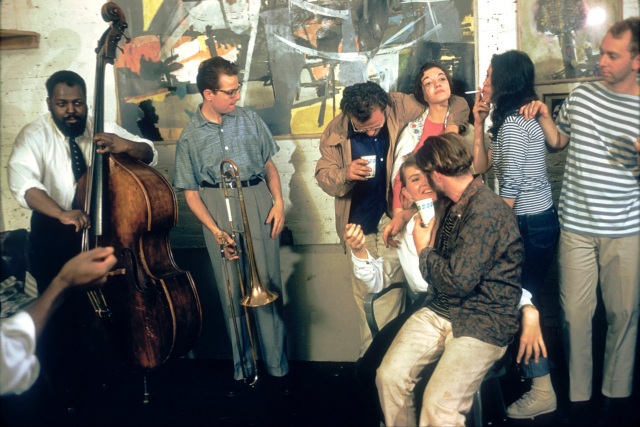 USA. New York City. 1959. A Beatnik party at an artist’s loft on Cristie and Division streets. The band is the Walter Bows Band.

A CRITICISM OFTEN VOICED against the Beats is how it was boy’s own stuff, that women figured only as muses or decoration, as “minor characters” (Joyce Johnson), left behind “off the road” (Carolyn Cassady). While it’s true that the movement was overarchingly male, both gay and straight, Glinn’s photos suggest something more nuanced. If anything, there’s a ubiquity of women in The Beat Scene, many in the heart and heat of the action, gutsily holding their own alongside the men, conversing and gesticulating, dancing and painting, reciting poetry, affirming their sexuality, creating and making their own noises, their own quieter history. 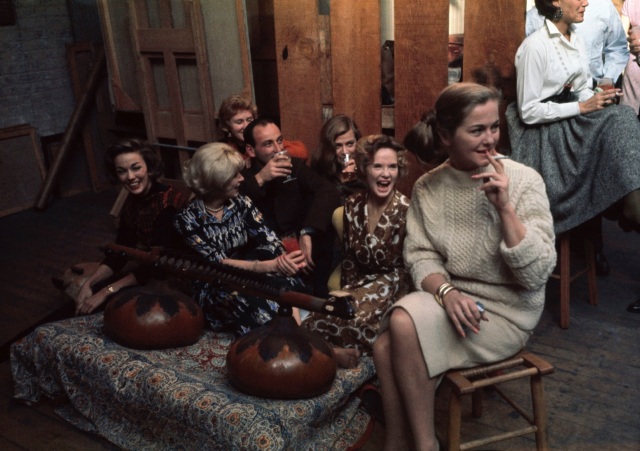 One image is of an eighteen year old poetess, Barbara Moraff, whom Kerouac called “the baby of the Beat Generation,” standing at the Seven Arts Coffee Gallery, reciting her verse to an enthusiastic crowd. A native of New Jersey’s most poetic town, Paterson, immortalised by William Carlos Williams and Allen Ginsberg, Moraff was one of the nation’s most talented young poets. Meanwhile, other women artists fill Glinn’s frame, like San Francisco painters Judy Smith, Emily Eugenia Frost and Jay DeFeo, working in their studios. Touching up a massive eleven feet by eight feet encrusted oil canvas, DeFeo crouches on her stepladder, busily making a name for herself among North Beach Beats.

Some of Glinn’s most sensitive portrayals are of the New York-based artist Helen Frankenthaler, with a similar penchant for giant abstractions. There are three or four of Frankenthaler working off the floor. She’d been inspired by a visit to Jackson Pollock’s Long Island barn, seeing him spread his canvases par terre, ferociously dancing on and around them, in dirty dungarees, dripping cheap paint, scattering rusty nails, and stubbing out cigarette butts. Only Frankenthaler’s action paintings were of a gentler quality. She diluted her paints, almost to the consistency of watercolours, letting them soak into the canvas to leave softer, ethereal stains, opalescent wisps of colour. 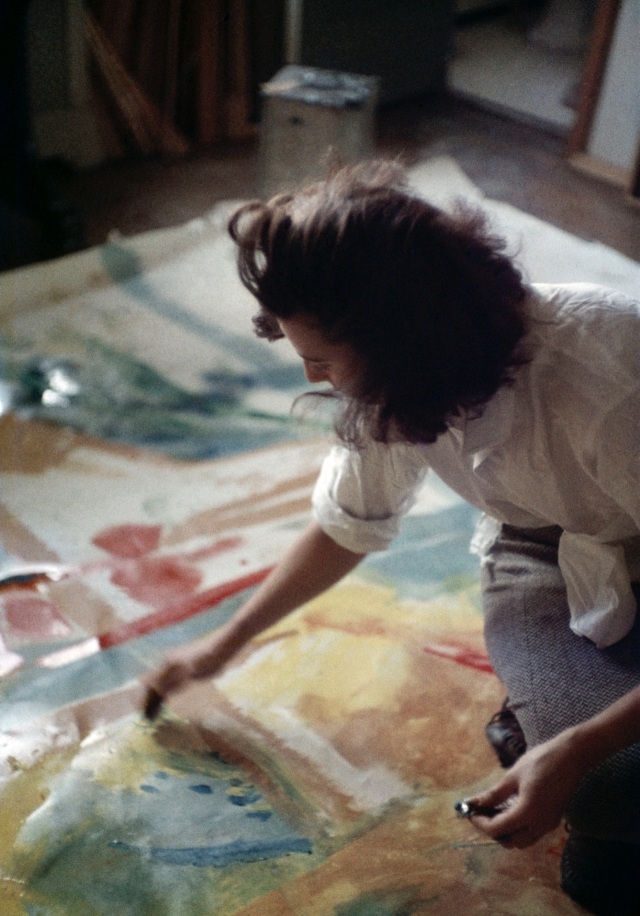 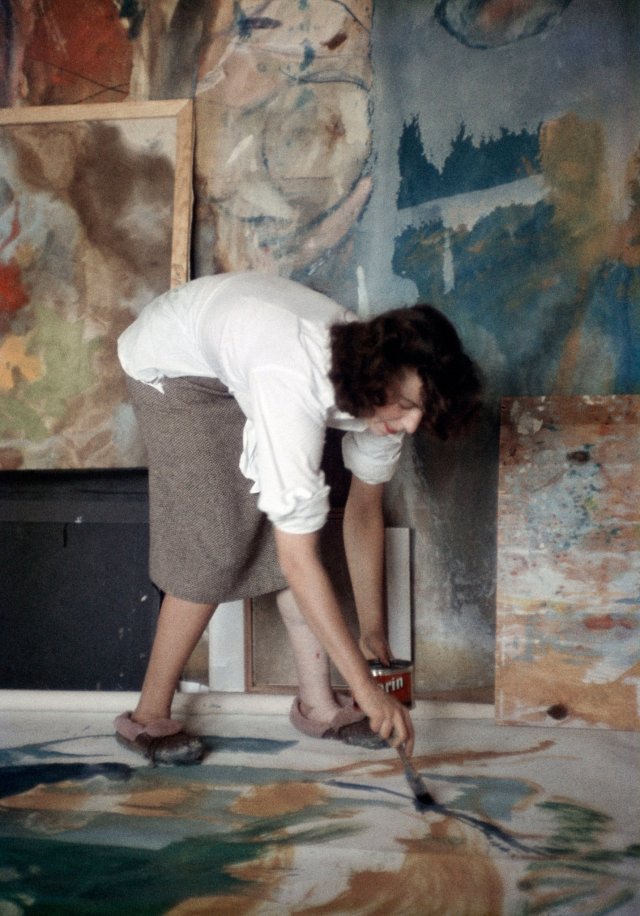 Frankenthaler’s status as a rising star began to twinkle eight years earlier, in 1951, when, at the tender age of twenty two, she and ten other women (together with sixty men!) were selected to exhibit in the historic Ninth Street Show. In its aftermath, Frankenthaler and four female peers became internationally renowned. The writer Mary Gabriel uses the moniker Ninth Street Women to locate Frankenthaler, Grace Hartigan, Joan Mitchell, Elaine de Kooning and Lee Krasner as groundbreaking, odds-defying women artists of the Beat era.

Glinn shoots Frankenthaler siting with Hartigan and Joan Mitchell one evening, engaging in pleasantries together, alongside a female admirer. But the apparent sorority here was misleading: in a cut-throat man’s art world, ambitious women like these were propelled into rivalry, often sniping at one another. Joan Mitchell, as hard a drinker and swearer as a lot of the men, labeled Frankenthaler a “tampon painter.” In the end, Mary Gabriel sets the record straight, pointing out that of the Ninth Street Women only Frankenthaler has anything displayed today at MoMA. For the most part—and this for the women as much as for the men—that decade’s exuberance and carefree hopefulness, lovingly instantiated through Glinn’s lens, was the first and last waltz of an artistic urban romanticism.

Writer, Urbanist, Marxist, Educator
View all posts by Andy Merrifield →
This entry was posted in All. Bookmark the permalink.