Posted on February 2, 2022 by Andy Merrifield

100 years ago, in Paris, February 2nd, James Joyce celebrated his fortieth birthday by raising a glass (or two…) to Ulysses, his great epic novel, launched into the world in all its full, if later revised, glory, that same day–this very day. Hats off here not only to author and book but also to the intrepid Sylvia Beach, whose Shakespeare & Company bore the moral and financial brunt of its initial publication.

Between 1914 and 1921, Joyce worked on his modern, single-day interpretation of the Homeric tale as he embarked on his own personal Odyssey around Europe—in Trieste, Zurich, and Paris. After the thrill of its release, though, his book met with widespread prudery. Customs officials in New York orchestrated an Auto de Fe of hundreds of copies. Authorities at London’s Croydon Airport similarly seized the book. A boat load got pulped at Folkstone harbour. 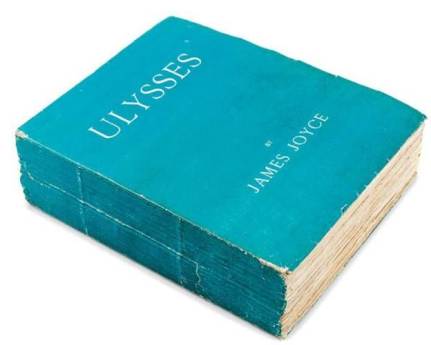 “I can discover no story,” said Archibald Bodkin, Director of British Public Prosecutions. Bodkin was happy to ban a book he’d barely read. “I have not had the time, nor may I add the inclination to read through this book. I have, however, read pages 690 to 732,” he claimed. “In my opinion, there is a great deal more here than mere vulgarity or coarseness, there is a great deal of unmitigated filth and obscenity.”

It wasn’t until 1936 before censorship relaxed: “Standards in these matters are constantly changing,” Britain’s Home Office said in November of that year. “Having applied these tests to Ulysses, “we are of the opinion that the book was not obscene and having regard in addition to its established position in literature decide to take no action.”

In short, Ulysses is hard going, a rather dismal affair, exerting heavy demands on readers’ attention spans. Even one of Joyce’s most ardent admirers, F. Scott Fitzgerald, wished the book had been “layered in America.” “There’s something about middle-class Ireland that depresses me inordinately,” Fitzgerald said, “gives me a sort of hollow, cheerless pain.” What someone also said of Gogol might equally stand for Joyce: “seldom has nature created a man so romantic in bent, yet so masterly in portraying all that is unromantic in life.”

Still, for readers courageous enough, hardy enough, perhaps even imaginative enough, Joyce takes you into the richly textured life-world of Dublin’s Odysseus, Leopold Bloom, wife Molly (Penelope), and the youthful Stephen Dedalus, whom we met in A Portrait of the Artist as a Young Man. In each, we catch glimpses of our own life-world, hear our own thoughts, witness our own dramas unfolding within the text; seeing them in print, and hearing them in our heads, helps us somehow. Protagonists’ experiences become our experiences, their anguishes our anguishes, their struggles our own. Human strengths and weaknesses tempest-toss before us. It’s a full fathom five for anybody willing to take the plunge, for everyone with sufficient breath to make it through, to be affected for evermore by something rich and strange.

Bloom is the gently twinkling lodestar. Jew and socialist, forty years old like his creator, an outsider in a hostile land (much like our own), Bloom quietly struggles to get on by, to keep his marriage intact, to come to terms with loss (death of baby son, Rudy, after 11 days). It’s a loss that gives Ulysses its ever-present emotional tug, straining relationships between husband and wife. At Barney Kiernan’s, Bloom gets lured into squabbles about politics. The drinks flow. Our Everyman encounters the jingoism of the “citizen,” a menacing nationalist who froths at the mouth like his pet mut. He comes on like a rampant Brexiteer or Trumpite about to storm the Capitol, a one-eyed Cyclops who even sounds like a good ol’ boy, waving the “Make America Great” flag: “broadshouldered deepchested stronglimbed redhaired freelyfreckled shaggybearded widemouthed largenosed longheaded deepvoiced barekneed brawnyhanded hairylegged ruddyfaced sinewyarmed hero.” The citizen and his cronies mock Bloom for his superior intellect, for his Jewishness, for his preaching of love: “I mean the opposite of hatred,” he stammers. “Force, hatred, history, all that. That’s not life for men and women, insult and hatred.” Of Bloom, Joyce always said: “he’s a good man,” an open man, too, “preferring to see another’s face and listen to another’s words.”

Meanwhile, the brooding Stephen, “the beautiful ineffectual dreamer,” comes “to grief against hard facts.” Like Joyce himself, Stephen once frolicked in “gay Paree” before receiving the fated, misprinted telegram: “Nother dying come home father.” Stephen’s day begins at Martello Tower, taunted by Buck Mulligan, friend, enemy, and tower mate, who thinks Dedalus killed his mother, refusing to kneel to God before her, on her last breath. Stephen gives back the tower’s key to Mulligan: “I will not sleep here tonight. Home also I cannot go.” “Loveless, landless, wifeless,” his daily perambulations begin, his entering the world “to seek misfortune.” Stephen collects his wages from Mr. Deasy, the reactionary headmaster of the private school where he teaches. Indebted, his measly three pounds and twelve shillings won’t go far. “I foresee,” says Mr. Deasy, “that you will not remain here very long at this work. You were not born to be a teacher.” “A learner rather,” Stephen retorts. “Life is the great teacher.”

Stephen, like Bloom, suffocates in provincial narrowness: “Coffined thoughts around me, in mummycases, embalmed in spice of words.” After drinks in Burke’s pub, he heads to Nighttown, the red-light district. A paternal Bloom discreetly follows. Joyce’s parallel narrative begins to converge. At Bella Cohen’s bordello, Stephen hallucinates about his dead mother and is confronted by two soldiers, Privates Carr and Compton. “What’s that you’re saying about my king?” Carr cries out at Stephen. “I’ll wring the neck of any fucking bastard who says a word against my bleeding fucking king.” “Let my country die for me,” Stephen quips, before getting “biffed” by Carr. Bloom intervenes.

Now, “Blephen and Stoom” find unity in metaphysical disunity; poet and practical man conjoin, two world-historical temperaments—the artistic and the scientific—embrace one another in a union we need more than ever. The pair wander empty darkened streets, rest awhile at a cabman’s shelter, slowly wending their way back to Ithaca, to 7 Eccles Street, where Molly sleeps. Would Stephen accept asylum here? Bloom enquires later over cups of cocoa. “Promptly, inexplicably, with amicability, gratefully it was declined.” Both must seek their separate passage. His peregrinations over, his Odyssey done, Bloom, weary, heads upstairs, seeking reconciliation. “He rests. He has travelled.”

In a stunning literary and psychological dénouement, Ulysses ends with Molly’s stream of unpunctuated consciousness. “Theyre not going to be chaining me up no damn fear,” she tells us. Visions and opinions, confessions and perceptions, judgements and recollections gush forth in one of modern literature’s greatest set-pieces. With immense warmth and sensuality, Molly’s soliloquy reaches its climax with her first self-giving to Bloom, “the day I got him to propose to me.”  He “kissed me under the Moorish wall and I thought well as well him as another.” Moments before we heard her tell herself she’ll get up tomorrow, make him breakfast, give him one more chance. A few hours earlier, she’d cuckolded him. (She and Bloom hadn’t had sex together for ten years, since Rudy’s death.) “I liked him because I saw he understood or felt what a woman is and I knew I could always get around him.” Well as well him as another: “would I yes to say yes my mountain flower and first I put my arms around him yes and drew him down to me so he could feel my breasts all perfume yes and his heart was going like mad and yes I said yes I will Yes.” 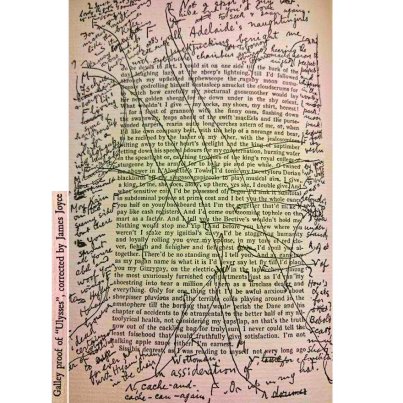 Ulysses says Yes when all around us today there’s so much No, so much death and division. Its closing lines, uttered inside the head of Molly, offer us an opening, words of affirmation, a great gust of generosity and paean to the life-spirit. And while we might quibble whether this is really a woman thinking aloud, behind its daring verbal dexterity and linguistic inventiveness a simpler homily lurks: life can be as epic as we try to make it, as Homeric as we live and retell it to ourselves. Fantasy, imagination, memory, regret, yearning… it’s all there; Joyce shows us how. He urges us “to domesticate the epic.” He gives us plenty to think about during a pandemic.

His is a literature and life pitched at ground level, practiced as a “shout in the street.” We can shout it out ourselves if we like, insist, as Ulysses insists, that we don’t have to genuflect to God or nation but can face the world standing up, on two legs, without crutches, here and now, together, looking within ourselves and at our relations with other people. Thus, for all its passionate inwardness, Ulysses is a great social text, an outwardly public document, with its motley crew of characters looking into themselves only insofar as they’re looking out onto the world, out onto our own world. Can we uphold Joyce’s visionary grandeur in these broken times? Can we follow Bloom’s long-wave thinking, maintain his good cheer come what may, retain an optimism of the intellect as well as that of the will? Bloom was surrounded by bigots just like us. Force, hatred, history, all that… That’s not life for men and women, nor for anybody else. It’s the very opposite of that that is really life.

Writer, Urbanist, Marxist, Educator
View all posts by Andy Merrifield →
This entry was posted in All. Bookmark the permalink.

1 Response to 100 YEARS IN FULL BLOOM